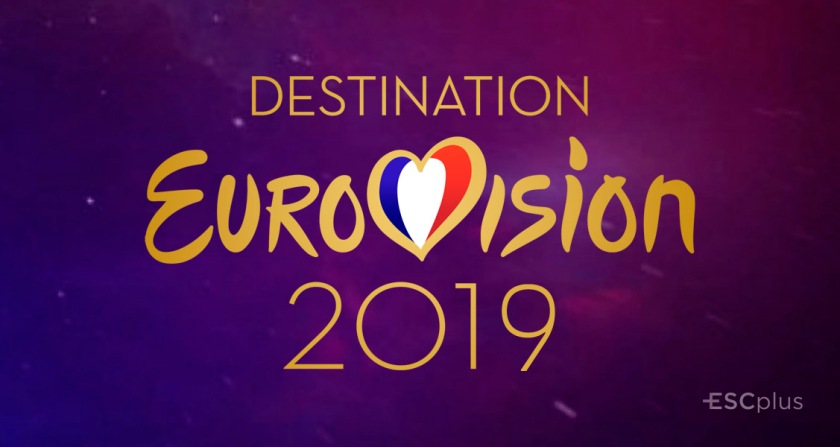 Tonight was the second semi-final of Destination Eurovision 2019, the selection process for the French representative in the Eurovision Song Contest. Last week saw Bilal Hassani, Chimène Badi, Silvàn Areg and Aysat book their places in the Grand Final. Tonight, the second group of nine competed for four places in final next Saturday, with 50% of the scores coming from a five-member international jury, and 50% coming from televoting. On to the songs!

The French broadcaster paid a lot of money for this box and they are going to work it out with as many acts as they can! The staging is bright and ingenious, moving from a piano at the bottom, to a violin at the top, via some stairs. I think Gabriella is at her best in this song when she can showcase her musical talents. She is putting a lot into this song but it almost feels restricting. A lot of fun for an opening number though.

This trio look stunning tonight in red outfits reminiscent of Miss Franklin herself. They are most certainly Dreamgirls when it comes to live vocals as well, they are tight and work well in harmony. Whilst more retro musical nature than modern pop act, this went down so well with the audience and honestly, I loved it too. Eurovision is an extravaganza and they brought a classy yet feelgood factor in their performance. Might do better with the televoters than the international jury though.

Ugo has taken the potentially brave decision to perform alone on stage. The song starts off well enough, with static interrupting what appears to be a sun rise on the LED screen behind him, with many close cuts. But as the song continues, he kind of just hops on the spot and the wide camera angles make him get swallowed up by the stage. Bar a couple of aborted words, his vocals were decent but I worry about this standing out. This is one of the more modern songs of this selection but will that be enough?

That opening shot, where she is walking through a tunnel illuminated with neon lights, is so modern; it is Surie’s 2018 staging on speed! The whole performance itself is very 2019, with the dancers around her. It feels like a potential summer hit, it would be good for the contest if more songs were included like that. I am definitely not sure about those live vocals though, I prefer when she is dancing and rapping to when she is trying to hit those higher notes. They need to be fixed if she gets to the Grand Final.

A very sweet song, performed very nicely by Noémie. She is dressed all in tartan and sounded great throughout the performance. My one qualm is that the song actually had such a natural beat and that could have been used so much more in the staging and the presence of the singer. The crowd loved it when she got in their midst and moved off her spot but maybe do it sooner, cause the song is begging for some colour and brightness.

This was the first performance tonight that had me transfixed on my video feed, not typing at all. The staging might be called simple, but that meant all of the focus was on her. She felt the song so well and it was so personal to her, as she (and maybe most of France) ended the song in tears and the audience ended on their feet, chanting her name. A beautiful and heartfelt performance. This is going through for definite.

Firstly, I love the inclusion of a young dancer in the performance, who I assume is the younger version of himself, and how he (dubbed by a mostly off-camera singer) and Doutson duet and dance together. In the middle section, there is a slightly run-of-the-mill sequence with backup dancers that I slightly lost focus on. As for the song, it is perfectly alright, but is a few years too late compared to other modern songs and performances. With this song, I think it’ll depend on televotes to get through.

A pretty fun package, all around. The staging features some humongous flowers and a pier looking out to the sea. She is with some band members, one of them holding an accordian, which I love. This feels like real old school Eurovision; this is a mixed blessing to be honest. Whilst the chorus is really fun and the singer has immense energy, it feels like the levels drop so much in the verses that she has to try and pick up the audience again. Much less applause than I was expecting too; it might be touch and go to progress.

That is all nine performances in the second semi-final completed and I think tonight was stronger than last weekend’s. It will be a shame to not see several of them in the final.

After the jury vote, it was clear Seemone was winning the semi-final after receiving the maximum number of points. There was a tight battle behind her for the three remaining places. The televote results were very tense but Emmanuel Moire won this round to move up to second place. The Divaz slotted into third with high scores from both halves of the vote and Doutson scraped through by a single point. Sadly that means we have to say goodbye to Ugo, Gabriella (shocker!), PhilipElise, Tracy de Sá and Noémie.

Who were your favourites tonight? Comment below, and for more Eurovision posts, don’t forget to subscribe to The Blogging DJ.