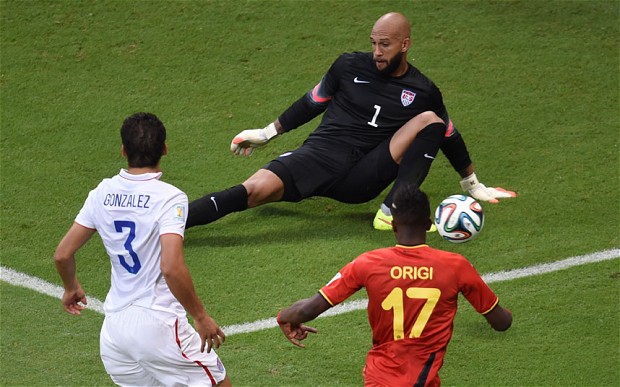 The final day of matches at the last 16 stage featured teams desperate to reach the quarter final stage in the World Cup. Argentina may have won all of their games in the group stages but never really played exceedingly well despite having world class players such as Lionel Messi and Angel Di Maria, so a much improved performance would be required against Switzerland, who at times showed great footballing ability in their previous matches. In the other match of the day, the USA, who had reached the knockout stages for the third time in the last four World Cups, played Belgium who, like Argentina, topped their group whilst not being overly impressive.

Angel Di Maria scored with just two minutes of extra time remaining to put a sloppy Argentina through at the expense of Switzerland. Despite 29 shots to their name during the match, the South American side were unable to break down opposition that, on the face of the rankings, should have been much easier than it ended up. However it was the Swiss who had the better chances in the opening periods of the game, with Granit Xhaka and Stephan Lichtsteiner both having chances in quick succession that Argentina keeper Sergio Romero was equal to. Switzerland then had a great opportunity to score when a long ball carved open the Argentina defence and found Josip Drmic, but his chip shot was wasteful and easy for Romero to get. The South Americans on the other hand were unable to break down their opposition and chances didn’t come easily, even with the likes of Lionel Messi in the side.

Argentina pushed forward more in the second half and were rewarded with more opportunities to score; Gonzalo Higuain’s header from Marcos Rojo’s cross had to be tipped over the bar by the outstretched arm of Diego Benaglio before Messi unleased a volley that, though powerful, flew just over the bar. Messi then managed to somehow fire a shot towards goal in a packed penalty area but after going through a sea of legs it was stopped by Benaglio before Switzerland got the ball away. After the designated 90 minutes the match remained goalless and so went to extra time. The match remained on a knife edge throughout extra time with Di Maria unleashing a powerful shot in the corner of the penalty area that Benaglio once again had to save. However Switzerland did not take the warning, and were duly punished with just two minutes of extra time remaining. Argentina went on the counter attack and the ball fell to the feet of Messi just outside the area, and he put a perfectly weighted pass into the path of Di Maria, who sent a low shot towards goal that the diving Benaglio couldn’t get his fingertips to. Argentina were then through to the quarter finals, but still remain unconvincing as one of the favourites for the tournament.

Stubborn: Argentina found it hard to break down Switzerland until their winner in the 118th minute.

Two goals in extra time put dark horses Belgium through against a battling USA side, despite keeper Tim Howard breaking a record for the most number of saves made in a World Cup match. This great performance from the Everton keeper was the reason why the USA was able to hold on and take the match to extra time despite being largely inferior during the regular 90 minutes. Howard’s first major influence on the game came after just 40 seconds, when he saved Divock Origi’s low shot with his legs after the Belgium striker was put through on goal. However the USA weren’t completely overwhelmed and some good interplay between Michael Bradley and Clint Dempsey led to the latter shooting straight at Thibaut Courtois in the Belgium goal. Belgium though were also guilty of wasting their chances, which were aplenty as the USA’s tactics left them vulnerable to the counter attack; Kevin De Bruyne scuffed two opportunities to score and sent a third straight at Howard as the first half finished goalless.

The second half saw the USA dropping even deeper into their own half, which meant chances became even more frequent for the Belgians. A mistake by the American defence led to Origi having a pop from 20 yards out but again was denied by the legs of Howard. Origi then hit a great through ball to Kevin Mirallas but miraculously Howard once again got something on the ball as the shot was deflected wide of the goal. Belgium captain Vincent Kompany then took a rare forage up front and was found five yards out by a De Bruyne cross, but he scuffed his shot allowing Howard to readjust his feet to make a diving save to his right. Chris Wondolowski then had the best chance of the match for the USA but somehow fired his shot well wide from just six yards out following a good flick on from Jermaine Jones as the match went to extra time.

But within 3 minutes of the restart, Belgium had the lead that their good play had merited. Romelu Lukaku surged down the right hand side and got to the byline, where he found De Bruyne who, after turning onto his right foot, fired a shot that sent Howard the wrong way. Belgium all but sealed the game at the end of the first part of extra time when De Bruyne patiently put a ball through for Lukaku to fire into the roof of the net. The USA were not done yet and a high ball from Bradley was met with a brilliant volley from Julian Green to give them hope that they could still win this match. They nearly did equalise as well, with first Jones poking the ball inches wide from a good position, then Dempsey being denied by Courtois following an intricate free kick. Belgium clung on for the victory that took them to the quarter finals, where they will play Argentina, whilst the USA will feel disheartened to go out of the competition but show signs of an improving footballing nation.