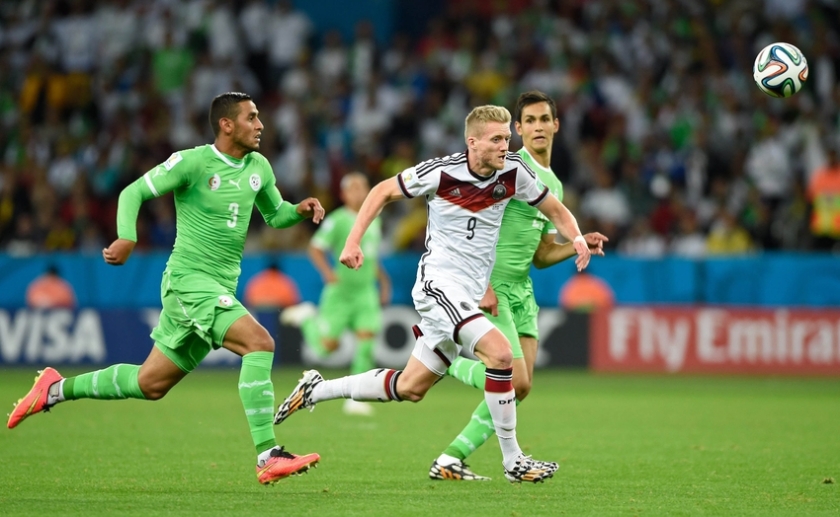 The penultimate day of ties in the last 16 of this year’s World Cup featured two European footballing heavyweights against two African nations that have done well to progress through the group stages. France, who finished top of the group with a goal difference of +6 from three matches, faced a Nigeria side that progressed as runners-up behind Lionel Messi’s Argentina. In the other match, Germany hoped to move deeper in the tournament by winning against Algeria, who had progressed to the knockout stages of the World Cup for the first time in their history.

Two goals in the last eleven minutes sent France through to the quarter finals at the expense of a battling Nigeria. Nigeria though started on the front foot and thought they had scored the first goal of the match, but Emmanuel Emenike was given the offside flag when he converted a cross from Ahmed Musa. Nigerian keeper Victor Enyeama then made a good save from Paul Pogba’s half volley after the latter had made a great run from the half way. Despite this chances remained few, with the final ball lacking for both sides, and thus was no surprise that the game finished goalless at half time.

France were still dangerous in the second half when they were running at the Nigerian defence, and a good one-two between Karim Benzema and Antoine Griezmann saw Benzema fire a shot that Enyeama partially saved before Victor Moses was forced to hook the ball off the line. Then in a mad few seconds, John Obi Mikel was the next to have to clear a Benzema shot on the line, and then Yohan Cabaye hit the crossbar. France seemed to be turning the screw on their African opposition and duly took the lead with just eleven minutes remaining. A corner by Mathieu Valbuena was completely misjudged by Enyeama, who came out to try and punch the ball away but instead slapped it away to Pogba who headed the ball into an empty net. Nigeria then conceded a soft second goal right at the death, with Joseph Yobo putting a Valbuena cross into his own net, which was a harsh scoreline on Nigeria who had been the better team for periods of the game. This meant they still have not got past the last 16 of the World Cup having got to this stage on three separate occasions, whilst France progress to the quarter finals as they hope to put their dismal 2010 World Cup performance behind them. 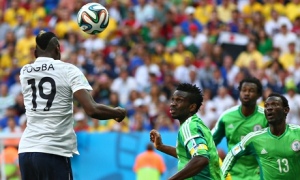 Germany survived a spirited display from last 16 debutants Algeria after scoring twice in extra time. For the 90 minutes of normal time though, a goal didn’t come for either team. Algeria though did not look like a team in their first ever last-16 World Cup match and the confidence they had was showing when Islam Slimani ran onto a brilliant through ball that carved the German defence wide open however Manuel Neuer sprinted off his goal line to brilliantly slide tackle the ball away from the Algerian striker. Algeria then thought they had taken the lead after Faouzi Ghoulam’s cross was whipped in and was met with a diving header from Slimani that hit the back of the net, but was correctly disallowed after replays showed the latter to be offside. Algerian keeper Rais M’Bolhi then had to make a double save to first deny a low long range effort from Toni Kroos then the follow-up from Mario Gotze as Germany finished the half the stronger, but neither team had a goal to their name.

M’Bolhi was once again Algeria’s saviour at the start of the second half when he tipped Philipp Lahm’s rising shot away for a corner. Thomas Muller’s free header from point blank range was then pushed away by the Algerian keeper before the follow-up from Andre Schurrle was blocked on the line by Esseid Belkalem. Algeria were clearly tiring in the second half and Germany had a couple more chances to win the match through Muller and Bastian Schweinsteiger but couldn’t find the breakthrough as the match went to extra time. Germany finally got the goal they were craving at the start of extra time when Muller held off Sofiane Feghouli before firing in a low cross that Schurrle met to put the ball into the back of the net. Mehdi Mostefa had an opportunity to bring Algeria back level but his low shot following a corner was dragged just wide, to the distress of the player. Germany then seemingly wrapped up the match when the Algeria defence were at sixes and sevens and Mesut Ozil took advantage by firing home after Schurrle had been denied again by M’Bolhi. There was at least a consolation goal for Algeria when Abdelmoumene Djabou scored from a Feghouli cross but their dream tournament had come to an end, whilst Germany were one step closer to reaching the final and would play France in the quarter finals.