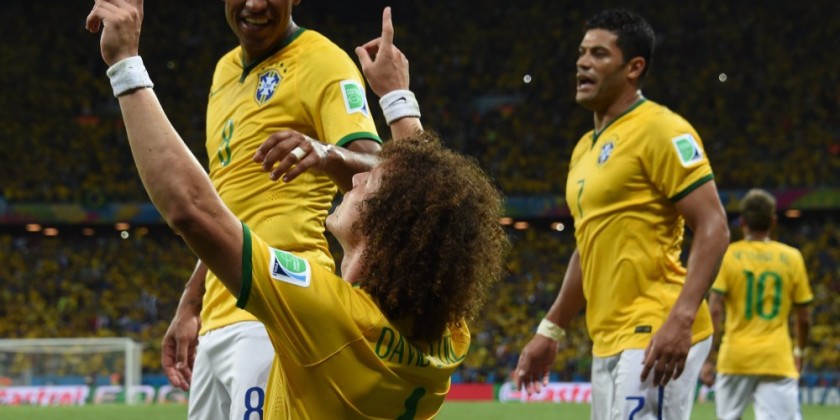 As the 2014 World Cup moved into the quarter-final stage, the tournament had already seen its fair share of controversy, incident and, more importantly, brilliant footballing skills and goals galore. However the good football was set to continue with the 8 remaining nations in the competition facing off for a place in the semi-finals. The hosts Brazil had not been that impressive up to this round and after scraping past Chile on penalties, a vastly better performance was needed against Colombia, who had a striker, in the form of James Rodriguez, in the form of his life. The second match was a stand-off between two European footballing heavyweights, with 1998 World Cup winners France, who were beginning to put their dire 2010 performance behind them with some good football on display, facing a Germany side who were hoping to reach their fourth consecutive semi-final at the World Cup.

Host country Brazil edged past fellow South American nation Colombia to reach the semi-finals on a night that fully showed the passion of the team and the fans. In a stadium that had an incredible atmosphere from the vast support for the hosts, the team paid them back with a passionate performance. They took the lead in the 7th minute when Neymar’s corner was tapped in at the far post by captain Thiago Silva after the Colombian defence had gone to sleep. However, their lead was nearly lost soon after when Oscar gave the ball away just outside his own penalty area and Juan Cuadrado fired the resulting shot hard but just wide. Brazil were giving the supporters much to cheer for though and Hulk nearly made it two after a good one-two with Neymar in the box but his shot was palmed away by Colombian keeper David Ospina. Hulk had another chance as the first half came to an end but his shot was pushed away by Ospina at his near post.

The second half was marred by a number of fouls, with Ospina making a routine save from a free kick before being fouled by Silva, who was booked and would miss the next game if Brazil progressed. A scramble in the Brazil penalty area nearly led to an opportunity for Colombia to score, but none of their players could make proper contact with the ball. Brazil though were seemingly not to be denied progression when a free kick from David Luiz from 25 yards out was hit superbly and flew past the fingers of Ospina into the top right corner of the net to put them two goals to the good. But ten minutes from the end Colombia were given a lifeline when Rodriguez played a good through ball to substitute Carlos Bacca, who was then upended by Brazil keeper Julio Cesar, to which the referee gave the penalty decision. Rodriguez then sent Cesar the wrong way from the spot to score his sixth goal of the tournament and more importantly give his team a way back into the match. The match then turned sour for Brazil when their superstar goal scorer Neymar was kneed in the back by Juan Zuniga and had to go off injured. After the match it was revealed that he had a fractured vertebra and was ruled out of the rest of the World Cup, which was a huge blow to the hopes of the nation. But Brazil held on to win a match that lacked fluidity from the large number of fouls committed, whilst Rodriguez was visibly distraught at the end but can be proud of his achievements from this tournament, as can his nation. But it was Brazil who progressed to the semi-finals, in doing so keeping their hopes of a record sixth World Cup, and their first on home soil.

Germany reached their fourth consecutive World Cup semi-final thanks to a solitary goal in the early stages from defender Mats Hummels that gave them victory over a slightly lacklustre France. The goal came when Hummels beat Raphael Varane to a Toni Kroos free kick and headed the ball into the back of the net giving keeper Hugo Lloris no chance. Before that though, their opponents could have taken the lead but Karim Benzema’s volley from a Mathieu Valbuena pass flew inches wide of the post when arguably he should have at least got it on target. Valbuena then had a chance of his own to bring France immediately level but his shot was saved at his near post by Manuel Neuer. It was clear that France were creating chances but couldn’t convert any of them; Benzema was the latest to have a pop after making a good run, but his shot was easy for Neuer to get to.

It was a similar story in the second half, with France creating opportunities but failing to take them; Benzema’s shot was brilliantly blocked by a sliding Hummels and Blaise Matuidi put his shot too close to Neuer as Germany looked to cling on and become the first ever team to reach four consecutive World Cup semi-finals. But that is not to say that they didn’t have chances in the second half to extent their advantage, with a suspiciously offside-looking Mesut Ozil crossing for Andre Schurrle, but the Chelsea player fired his low shot straight at the legs of Neuer when he should have really done better. In the closing stages France put all of their men forward in an attempt to find an equaliser, but Benzema’s shot from an impossible angle was easy for Neuer to palm away. So Germany held on for the victory that saw them break the record for the most consecutive semi-final appearances, and are one step closer to lifting the cup, whilst France can’t afford to be too disappointed with a quarter-final appearance following their dire 2010 showing.

Fast Start: Mats Hummels scored in the 12th minute to put Germany through to the semi-finals