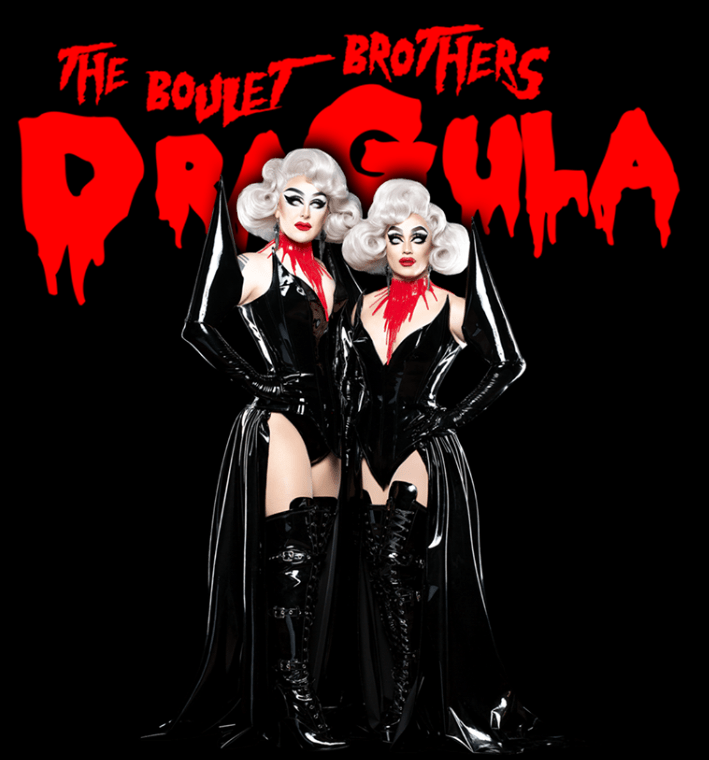 Good evening and welcome to another post recapping the events of the horrifying Drag TV show known as Dragula, the brain-child of The Boulet Brothers. Each week, the contestants will be challenged on a task involving presentation and performance, usually focusing on an alternative or horror-themed side of drag. The contestants who do the poorest will face the extermination challenge, which will test their guts and hunger to the full, before one is booted from the competition. Last week they were tasked with coming up with vampire looks and performing in a burlesque floor show; the unlucky one to be staked through the heart was St. Lucia. Now nine remain to battle to be win the $25,000 prize and earn the title of Dragula: The World’s Next Drag Super Monster. On to episode three!

*Warning: This recap contains spoilers. Turn back if you want to watch this episode unspoiled*

At the top of the show, in a marked change to the previous seasons, the competitors come into the crypt out of drag before the challenge to discuss the events of the previous week. I am not surprised that they thought St. Lucia was the one who got the chop, as she didn’t give enough for me besides being pretty. In reality TV terms, she was either going to go home very early or surprise everyone and make the final 3 or 4. I am also not surprised that the other competitors would go for Maxi Glamour’s look last week, I had the same feeling. However, it is good to see that they still have a lot of fight left for the competition and maybe Priscilla Chambers shouldn’t have so many opinions that could bite her in the behind.

The competitors are then given the challenge to come up with a spectacular look inspired by rock and metal artists of the past and will then perform as two bands to a rock number on stage. They then will also have to come up with a cohesive look for the performance side of this challenge; this challenge had been done last season as Episode 3 as well so it is good to see its return. The Boulets then split the nine into two bands, with Evah Destruction (a potential frontrunner so far this season) the lead singer of the first band, also comprised of Dollya Black, Maxi Glamour and Priscilla Chambers (who all clashed in the crypt before). The second band is made up of Hollow Eve, Landon Cider, Louisianna Purchase and Yovska, with Maddelynn Hatter being made their lead singer.

After yet another rehashing of Dollya Black attacking Maxi Glamour, it is on to rehearsals. Maxi wants to do her signature blue look but is immediately shut down by the others because it won’t look cohesive. Dollya on the other hand is lacking any kind of rhythm and the whole thing is looking a mess at this stage. The latter is also under scrutiny for being a hypocrite by attacking Hollow Eve and her focus on Filthy looks behind her back. This is going to bite her in the back. Also under scrutiny is Maddelynn Hatter for talking down to the younger competitors; there is so much tension and it is really interesting considering it is a group challenge. The second team have come up with this great witch theme, featuring a blood ritual, but looks low energy and didn’t rehearse much at all in the allocated time.

After a conversation between Maddelynn and Dollya where they made up but the latter was looked to be completely in the wrong, it is time for the floor show. The Boulets look amazing as usual, with a red latex leotard and matching headpieces to mimic teeth, and of course a lot of leather. The guest judges today are fellow drag legend and show producer Peaches Christ and musician Henry Rollins. In order of appearance, here are my thoughts on their floor show looks:

It is now time for the performance section of this challenge. The witchy band, KOVEN, indeed do a blood ritual by pricking their fingers before the challenge and putting the blood in the candle. SLAG, on the other hand, come out with a flag with the band name but their looks are more coherent, going for a trashy style of outfits with Latex. In terms of the lead performers, Evah has more energy than Maddelynn out of the gate. When Maddelynn goes to pull two needles out of Hollow Eve’s face, as was rehearsed, she did so too early and Hollow broke character, walking off stage and causing chaos. It came across unprofessional on Hollow’s part, even if it wasn’t the planned timing, cause you always have to keep performing. In terms of performing as a team, I think SLAG had the upper hand in this challenge, though wasn’t as good as Biqtch Puddin’s team last year.

It is now time for the judges to give their feedback. SLAG receives praise for the coherent looks, being compared to a Gothic Jem & The Holograms. Maxi Glamour also received praise for her acrobatic performance and Evah for standing out with her energy as the lead singer. Hollow Eve takes the blame for the show stopping mid-song, but also lambasts the team for not communicating well. The blood ritual was also targeted for looking rushed and that they didn’t use their team numbers to their advantage. To no-ones, surprise, SLAG was named as the winning team and Evah Destruction took home the challenge win, the third different winner in three episodes. This meant that Maxi, Dollya and Priscilla were all safe.

Both of Hollow Eve’s rock outfits were praised, whereas Yovska was critiqued on not reading rock artist at all, even though it was better than the previous week. Landon was praised on the spinning guitar with sparks coming out of it, as well as his floor show look. Maddelynn made the judges smile with her energy in her floor show and the judges appreciated that Louisianna took their notes to amp up the makeup and costume. As a result, Louisianna and Landon were called as safe. That meant Yovska, Maddelynn Hatter and Hollow Eve were all up for extermination. Like last season, it would be a trip to the mobile tattoo parlour for these three, however, their fellow bottom performers will get to decide what tattoo they will receive.

After breaking down embarrassed for their performances, Yovska and Hollow Eve join Maddelynn Hatter in the extermination. All three of them get through with no real problem but, after facing extermination for the second consecutive week, Yovska is exterminated, being impaled with the top of a guitar. That leaves eight competitors left to fight for the crown and the title of Dragula; I’ll see you readers next week for the recap of Episode 4.

What are your thoughts on Episode 3 of Dragula Season 3? Did you agree with the extermination decision and who do you think are the frontrunners going forward? You can let me know in the comments section below.