This weekend saw one of the biggest football leagues in the world kick off the 2016/7 season. All 20 teams were in action across three days and here are my views on the matches, along with my predictions for the clubs’ seasons.

Hull City 2-1 Leicester City
Surprise champions of last year’s Premier League, Leicester City started their campaign with a disappointing result against a Hull City team who is without a permanent manager and who only had 13 senior players available. The Leicester team featured many players from last year’s memorable run but they looked strangely off the pace. They couldn’t penetrate the Hull defence in the first half after some last-ditch blocking and even the decision to award them a penalty was not clear-cut, as the initial contact appeared to take place outside the penalty area. Jamie Vardy in particular looked off his game, with Musa and Mahrez solid but not spectacular enough to find the equaliser. Hull, on the other hand, showed great fighting qualities that is needed from a newly promoted side. Questions though still hang over the future of the club and sadly one famous win will not answer those questions. Though this will be a frustrating result for the Foxes, we should expect them to pick themselves up and have a solid season, if not as spectacular as their title-winning one. 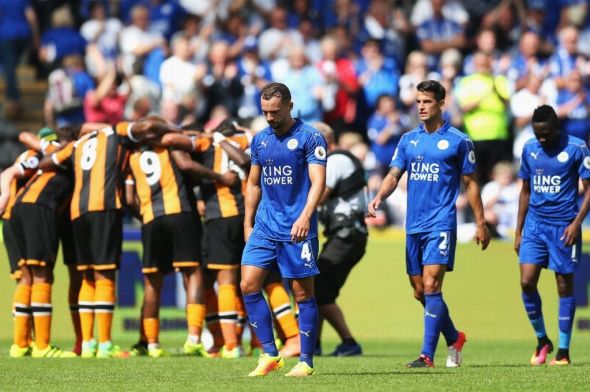 Manchester City 2-1 Sunderland
On paper, three points for City in their first match with Pep Guardiola as their manager is a good start. However when you consider that their two goals came courtesy of a penalty and an own goal, it appeared as though the lack of fire power that plagued the team last season had not yet been sorted. City had several good chances to extend their lead after Sergio Aguero converted their penalty but couldn’t take any of them and consequently were punished by Jermain Defoe getting between the centre backs and scoring. That was also the 16th different Premier League season Defoe has scored in. After Paddy McNair’s unfortunate own goal, City had yet more chances to close the match but didn’t take any of them. Sunderland looked solid going forward without being spectacular but were much better than their sub-par performances at the start of last season. City had 77% of possession but scored no goals in open play at home, which raises questions as to whether they can score enough to mount a serious challenge for the title. 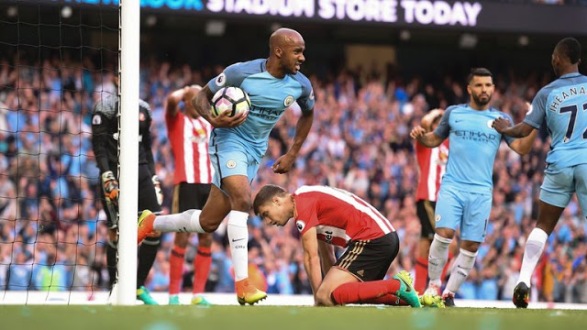 Everton 1-1 Tottenham Hotspur
For most of last season Spurs were the closest challengers to champions Leicester before dropping off slightly in the final month. Their 2016/7 season started badly after Ross Barkley’s free kick went in from a long way out without anyone getting a touch on it. Everton were on top in the first half and had a couple of great chances to extend their lead with the Tottenham defence looking incredibly shaky. They then scored out of nothing ten minutes into the second half with Erik Lamela’s header accurately directed into the corner of the net. This seemed to raise Spurs and from then on were on top of the Toffees, with several fine stops from the keeper keeping them in the match. This could be another “what if” season for Everton, with average results despite a solid squad keeping them in the midfield, whilst Spurs need to stop having bipolar performances, like their poor first half today, or their spectacular capitulation against Newcastle last season, if they want to get European football again. 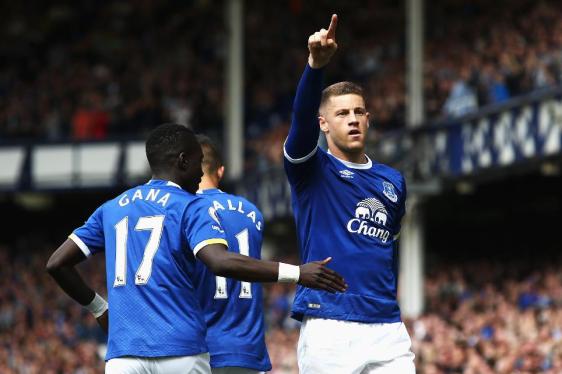 Burnley 0-1 Swansea City
Championship winners last season, Burnley’s performance highlighted the gulf in quality between the two leagues and how difficult life can be for newly promoted teams. They had their chances, with Andre Gray looking very impressive on his Premier League debut and several good saves from the Swansea keeper stopping Burnley. However if you don’t take your chances then it is likely you will be punished and the Swans scored late on with Leroy Fer poking in from close range after Tom Heaton spilled Fernando Llorente’s header. Both teams played an attacking style that meant an open match but Burnley’s problem last time in the Premier League was the lack of goals. It could once again be a step too far for the Clarets, with only a couple of players having the potential to score many goals. Swansea were very good, especially on the wings and look like having another solid season. 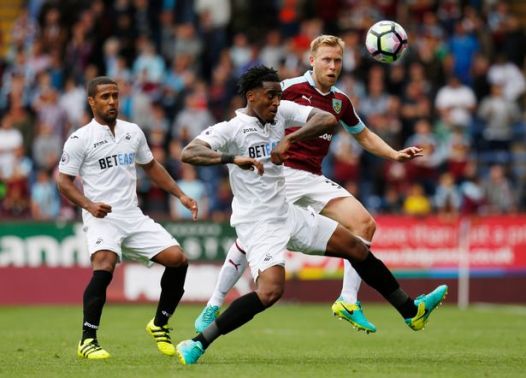 Crystal Palace 0-1 West Bromwich Albion
In the past couple of seasons, Crystal Palace have started the season very strongly before dropping off. Therefore this defeat to West Brom may have created concern. It wasn’t as though they had their chances in a mostly uneventful game but poor shots in good positions and saves from the opposing keeper kept them off the scoresheet. Instead it was a typical smash-and-grab performance from the away side with Salomon Rondon heading into the net with 15 minutes remaining. It is expected that both of these sides will solely aim for survival this season and on the basis of this performance, both need to find goals, especially Palace, who could be in real trouble if they don’t get out of this long rut. 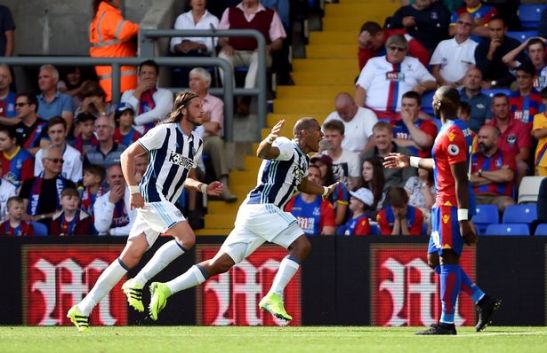 Middlesbrough 1-1 Stoke City
Middlesbrough made a great start on their return to the top flight of English football with ex-Manchester City striker Alvaro Negrado scoring after just 10 minutes.They looked dangerous on several occasions and unlike their fellow new boys Burnley, didn’t look short of goals. Good signings made during the summer have strengthened the team further and they could well have the most success out of the promoted sides. They were denied three points though thanks to a typically Stoke performance with Xherdan Shaqiri scoring a great free kick to level the sides. The Potters have been solid for the last few seasons and look an outside bet to get European football this year.

Southampton 1-1 Watford
Two new managers to the Premier League faced off on the opening weekend and both will probably be relatively satisfied with what they have seen. It was the Hornets who drew first blood at St Mary’s; Etienne Capoue scoring his debut goal after a good header from Troy Deeney. Southampton had good opportunities but poor efforts on goal in the first half kept them behind. They kept putting on the pressure and Nathan Redmond finally equalised for the Saints. Watford faced a nervous finish when Ben Watson was sent off after a synical foul to prevent a one-on-one situation but held on to a point. Watford looked just as solid as they did last season whilst Southampton might be slightly concerned with their generally poor finishing. Both teams should be solid in mid table this season, with Watford maybe struggling slightly to stay in the league.

This match was quite comfortable for Manchester United, who look to be a much greater threat, especially in attack. The new signings look to be great pieces of business, even without Paul Pogba in the team. However one can not assume a massive amount about the title chances of the Red Devils when they play a team like Bournemouth. Eddie Howe did a good job to lead the club to safety in the first season after promotion but here they were outclassed in every area. That isn’t to say that they were bad, with several players showing promise, but the Cherries need to improve if they are going to avoid relegation for another season.

The first big clash of the season took place on Sunday at the Emirates Stadium, where Liverpool won a seven goal thriller. Arsenal took the lead, at which point no one would have predicted that Liverpool would score four without reply. At 4-1 there were massive boos from the home crowd and surely would add fuel to the argument about whether it is time for manager Arsene Wenger to leave the club. The negativity from the home fans undermined how brilliant Liverpool were in attack though. Questions now will be raised as to whether either of these clubs will get a top four position; on this basis Liverpool look the more likely. If they don’t concede like they did on Sunday then I’d bet them to beat the Gunners in the Premier League this season.

The final game of the opening weekend of the Premier League saw Chelsea, now managed by Italian Antonio Conte, beat their London rivals West Ham. It wasn’t a game without controversy however and once again it came from the Blues’ striker Diego Costa, who was lucky to be on the pitch after a late challenge that could have resulted in a second yellow card before scoring the winner. This team isn’t vastly different from the under-performing 2015-16 squad, which raises questions as to whether the squad is strong enough to challenge for the title. I predict a much better season for Chelsea that will end up in a Champions League spot whilst the continuously impressive West Ham could one of the closest challengers to the usually dominant clubs.

So what do you think about your favourite team’s performance on the opening game of the season? And where do you think your team is going to finish? Comment below your thoughts.