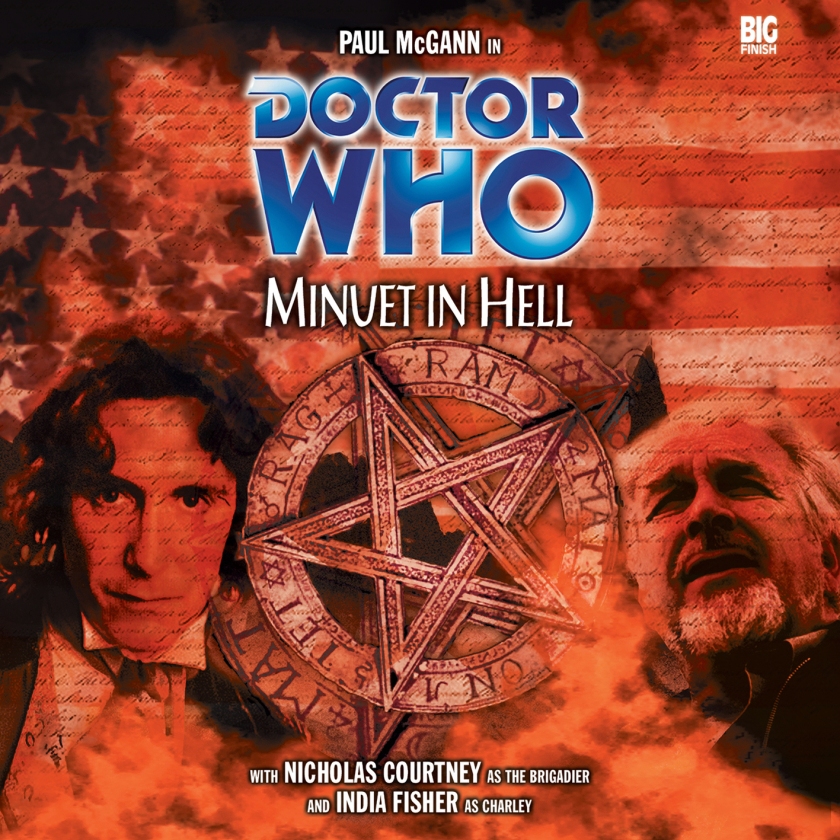 Big Finish Summary:
The 21st century has just begun, and Malebolgia is enjoying its status as the newest state in America. After his successful involvement with Scotland’s devolution, Brigadier Alistair Gordon Lethbridge-Stewart has been invited over to Malebolgia to offer some of his experiences and expertise.

There he encounters the charismatic Brigham Elisha Dashwood III, an evangelical statesman running for Governor who may not be quite as clean-cut and wholesome as he makes out. One of Dashwood’s other roles in society is as patron of a new medical institute, concentrating on curing the ills of the human mind. One of the patients there interests the Brigadier – someone who claims he travels through time and space in something called a TARDIS.

Charley, however, has more than a few problems of her own. Amnesiac, she is working as a hostess at the local chapter of the Hell Fire Club, populated by local dignitaries who has summoned forth the demon Marchosias. And the leader of the Club? None other than Dashwood, who seems determined to achieve congressional power by the most malevolent means at his disposal…

“Minuet in Hell” is a very ambitious story that tries to weave too many elements together, which leaves the final result as a diluted product of what it could have been, despite the welcome return of Nicholas Courtney as the Brigadier and a solid performance by Paul McGann as he reveals more sides of his Doctor.

The element of this story that stands out to me most is its length; compared to other Doctor Who audio books, its parts are exceedingly long. Part one comes in at a whopping 44 minutes! There is a lot to unpack in terms of narrative at the start of the story, with the Doctor (Paul McGann) in a mental institution with delusions about being in hell and not being able to remember who he is, his companion Charley Pollard (India Fisher) waking up in a room with many other women told they will be waiting on important men in a Hell Fire Club, the summoning of a demon in said Hell Fire Club, and the experiments in the institution the Doctor is trapped in that has disturbing implications. Add to that the welcome return of the Brigadier (Nicholas Courtney) and a young woman with psychic powers who comes from a secret order hunting demons of the world and it all becomes a bit much. Not surprisingly, you get a sense that the writers may have bitten off more than they could chew with this ambitious plot.

It actually took two attempts for this audio book to be completed. The first listen did take place during the height of the COVID-19 pandemic in late Spring of 2020, which is partially the reason. But even when listening to it for a second time, the pacing and constant jumping between scenes, plot threads and characters is difficult to follow. The sheer amount of exposition that is being thrown at the listener in the first part, followed by a messy and slightly confusing start to the second, meant that it was tough to stay invested in the story. Things did improve for the second half of the audio book in a way, as we understood where every character was at and the audience surrogate (Charley) had her memories back. To get to this point in the story though, you had to wade through an overwhelming amount of exposition and cuts between scenes where it wasn’t clear what was going on.

Where the pacing became more consistent in the second half of the audio book, the writers got bogged down with plot points that dragged attention away from the narrative. The biggest one guilty of this was the character of Gideon Crane (Nicholas Briggs), a fellow patient at the institution who believes he is the Doctor, and not the man played by Paul McGann. This could have worked on the screen through the use of lighting and blurred effects to make the audience doubt but telling the story solely through the medium of audio means this is a non-starter. Paul McGann’s voice is so distinctive that, even though is confused and amnesiac, he is playing the Doctor, and Crane is the one who has lost his identity. This sub-plot goes on for the majority of parts two and three with these characters and, as a result, less time is focused on Dashwood and his plotting.

Come to think of it, Dashwood’s plan also takes a long time to unpack for the audience. He makes a deal with what he believes is a demon, but is actually a psychic alien cloud who takes the form for Dashwood’s benefit, to become the sole candidate going up for Governor of the newly formed Malebolgia state, and in return he needs to use the brain surgery/download machine in his mental institution to insert the essence of the other members of the alien parasitic species into catatonic individuals. The ‘demon’, after seeming very real and mature for a Doctor Who monster at the start, becomes a cartoonish character that possesses very little gravitas or a sense of threat in the audience, and Dashwood is foiled by… the pressing of a button. Maybe too much is being read into the use of “Hell” in the story title and the cover art, but then again the demonic entities seemed a threat when the Doctor and the Brigadier faced them in part two. I guess that I was expecting more “Hell” in “Minuet in Hell” than what was presented.

If this review has seemed overwhelmingly negative up to this point, there are some positives to speak of. The character of Becky Lee Kowalczyck (Helen Goldwyn) has some decent moments, such as when riding a motorbike with a nervous Brigadier through the streets of the city, once you get past the questionable accent. Charley doesn’t really get presented to the audience in a new way for much of the story, but there is a promise in the reveal of her true status in the timeline when the Doctor refuses to tell her why the ‘demons’ rejected her because she was already dead. Thankfully, Nicholas Courtney is on top form as the Brigadier, especially when he is delivering fantastic monologues. Fans of the 70s seasons of the show can easily imagine the frustration on his face when corresponding with the oblivious Secretary of State. Paul McGann is also good as the Doctor, as this is the first time we really see this character struggle in this audio book series. This portrayal also goes well with what we know about this Doctor, that he is one of the most human-like with his emotions on the show, including the revived series.

“Minuet in Hell” is a very ambitious audio book, attempting to combine a Hell Fire Club narrative with a focus on a confused and amnesiac TARDIS crew. There are some bright points, most notably the performances of Paul McGann and Nicholas Courtney as the Doctor and the Brigadier, as well as the development of Charley as a paradox in time. Editing this overlong story and choosing to focus on fewer narratives but making those more powerful would have done this well. It is not an awful story by any means, but it is the first in this series that was a bit of a struggle to get through.

“Minuet in Hell” is available to listen to for free on Spotify or for £2.99 to download from the Big Finish site. The link to this audio book is below:

The next audio book in the series sees the return of a pairing not seen together since the start of this series – the Fifth Doctor (Peter Davison) and Turlough (Mark Strickson) who arrive for the Rio de Janeiro carnival in 2080 and uncover an ancient lupine threat. You can read my review of Audio Book #20 – “Loups-Garoux” – very soon!

If you enjoyed reading this blog post, then please do like, and subscribe to The Blogging DJ to be notified via email when new posts are published. If you have any recommendations of audio books that you think I would enjoy, or anything Doctor Who related you would like to see in the future, drop me a comment in the section below. I will see you all very soon for my next audio book review in this series.