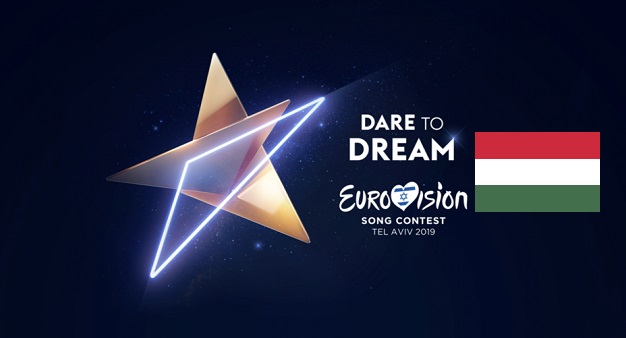 Hello everyone and welcome to another post on The Blogging DJ. It’s time for another Eurovision preview post; have certainly been flying through them in the past couple of weeks. Now, we are jetting off to Budapest, to look at the Hungarian entry, Joci Pápai and “Az én apám”. The singer represented the country in 2017 and took a very solid eighth place, so can he do better with this? Let’s find out.

As they have done since 2012, the Hungarian broadcaster Duna has organised a national final, A Dal, to select their entry for Eurovision. The submission period for entries opened up in October 2018, with the thirty competing entries released to the public on the 3rd of December. A Dal 2019 comprised of three heats and two semi-finals, with individual scores from a panel and an aggregate score from the public progressing the top eight to the Final. The top four from the jurors were progressed into the superfinal, where the public vote chose Joci Pápai and “Az én apám” to represent Hungary at Eurovision. It has since been announced that the song will perform in the seventh slot of semi-final one.

Honestly, I wasn’t the biggest fan of “Origo” when it first came out, but I grew to really like Joci’s voice. That voice is at the centre of this emotional ballad, singing about his childhood and his father. Even though it is in Hungarian, you can hang on to every word he is singing. I also really appreciate the touches of traditional music in his entry, creating a richer blend of ballad than in Western music. This has been flying under the radar with fans but I think this will surprise again, providing they keep the staging minimal, with the emphasis on the universal message, regardless of what language you speak. 8

According to Oddschecker, you can currently get odds ranging from 100/1 to a huge 300/1 on Hungary winning the Eurovision Song Contest this year. This suggests that bookmakers and betters see this song as, at best, scraping into the Grand Final. However “Origo” (the artist’s entry in 2019) surprised many with its final product and result, so it may be worth a bet in the top ten market if you believe in the song enough.

Hungary have entered the Eurovision Song Contest sixteen times since making their debut in 1994, only missing out for the Grand Final on two of those occasions. It was on their debut that this country achieved their best result in the contest to date, with Friderika Bayer claiming an excellent fourth place with her song “Kinek mondjam el vétkeimet?” (“To whom can I tell my sins?”). Last year, Hungary sent the metal band AWS and, despite rocking out on stage and reaching the Final, they finished in twenty-first place overall.

So what do you make of Hungary’s entry for Eurovision 2019? Can Joci Pápai again bring the country to the top ten? Let me know your thoughts in the comments section below!

Don’t forget to like and subscribe to The Blogging DJ to be notified about when I post – if you are a Eurovision fan, there will be plenty of posts going live in the next few weeks, so stay tuned for those.