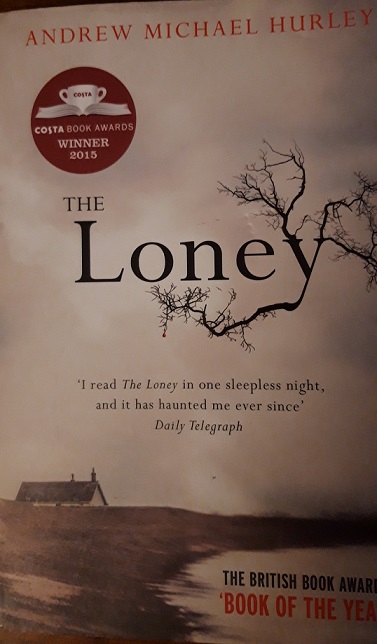 Back Cover Summary:
Two brothers. One mute, the other his lifelong protector.

Year after year, their family visits the same sacred shrine on a desolate strip of coastline known as the Loney, in desperate hope of a cure.

In the long hours of waiting, the boys are left alone. They cannot resist the causeway revealed with every turn of the treacherous tide, the old house they glimpse at the end…

Many years on, Hanny is a grown man no longer in need of his brother’s care.

But then the child’s body is found.
And the Loney always gives up its secrets, in the end.

*Warning: This review does contain some spoilers relating to the plot. Turn back now if you want to read this book!*

The effectiveness of the description in The Loney creates an unsettling atmosphere, that is second in horror only to the actions of the characters, without resorting to the tired tropes of the genre, in this successful novel.

The Loney has a suitably creepy atmosphere. When the protagonist and his brother first arrive on the beach, it is the very definition of desolation. There are mentions of “a ragged trail of debris”, “seagulls had been strangled […] twisted things of bones and feathers” and “huge grey tree stumps”. (p.81) Visually, it would captivate audiences in a film adaptation, yet still holds up without those visual cues. It isn’t hard to believe that this is the setting where characters lose their faiths; it is untouched by nature and a forgotten dumping ground for the rubbish of Man. With the god-forsaken land, combined with the frequently bad weather, the author has designed a distinct feeling of paranoia and claustrophobia in the house, especially when it is revealed to be far from the paradise characters needed. This is an excellent quality for a chiller and there’s not an obvious jump scare in sight.

There is an interesting discussion in this book about religion against the natural and supernatural, and how the evil actions of human nature are more threatening than anything other-worldly. Flashbacks reveal a time where the narrator was an alter-boy under the power of a fanatical priest, who would physically abuse a child for his upbringing and appearance. The Mother of the narrator took desperate measures to appeal to God to ‘fix’ her disabled child. Two side characters menace the central family by killing animals and hanging their carcasses near the house. A man keeps a pregnant girl captive within a crumbling house for her unborn child. The evils of Man can be so much more terrifying than the supernatural, as readers can see the traits within themselves. Knowing this, I am glad that the author chose to focus on this to create an unsettling atmosphere, as it actually works better with the setting, as though the characters inhabit a purgatory that has been forgotten by God due to their actions.

It’s always hard to create a satisfactory climax, especially for a novel that has so much focus on the personal and the psychological. I believe that this book’s final fifty pages are suitably creepy and high in stakes. The more menacing characters come together against the narrator and his brother and it doesn’t seem like they will come out of the situation. The sudden switch to the present day, decades later, creates many questions, but does so in a satisfactory manner. Many points surrounding the supernatural (is witchcraft involved in Manny’s healing?) are teased in front of the readers but never answered, thus keeping human nature as the main evil. On the flip side, it feels like the narrative is a bit disjointed and only becomes a true horror book towards the end. I can only name three or four memorable moments within the book that are chilling; the rest is padded with psychological and religion discussion. This makes the climax feel off in tone compared with the three hundred pages before.

Writing this review, I did not think that I would ever complete the novel. A few things have happened recently in my personal life that had to be the priority, so reading took a back seat. However, I also wasn’t totally invested in the narrative or the characters until the drama became more powerful in the climax. The fact that it is not a pure horror actually works in its favour, and it is rich in eerie descriptions and unsettling human behaviour. However, I struggled to see the light amongst the religious discussion and, in spite of what has happened to me recently, I believe that I would have enjoyed the distraction of a more fantastical or immersive book.

The Loney is an example of how unsettling characterisation and brilliantly eerie descriptions can create a good horror novel with only a sprinkle of supernatural lore. It is no surprise that this won Book of the Year at the British Book Awards and I am looking forward to reading more works from this talented writer.

*The poll to choose my next book is now up on my Twitter account (https://twitter.com/thebloggingdj/). Happy voting!*