The past weeks have been far too hot to enjoy a long walk around a random destination. But the forecast for yesterday showed pleasant and cloudy weather, so I hopped on a train to the terminus station of Shoeburyness.

Originally, I had hoped to go north into the less trodden areas and thereby avoid the summer tourists who seem to walk slowly in a line in front of you and make as much noise as if they were at a rock concert. However, a barbed wire fence at the tip of the East Beach marked the end of my exploration in that particular direction. From the moment I got off the train there were signs of a strong military presence, from a railway track used by the MOD to a signpost marked ‘Gunners Park’. It would be the latter that I would aim to get to, since it seemed like there was nothing of any real interest north of here.

Gunners Park, public access grounds off the Shoebury Garrison, was an interesting prospect. Walking past the old buildings, many of which have been surrounded by stylish modern apartments, there was a faint sense of the history that this place had been subject to in the decades previous. They were in better shape than the old artillery units at least; many of them stood desolate, a sad state when you consider the money that has been pumped into the nearby Southend seafront. Keep out signs warn visitors to keep their distance. This was the image that stuck in my head following this walk. I am sure that there are many sites of historical and cultural interest that also exist as crumbling reminders of the past. Another thing that I noticed was that the number of dogs seemed to outnumber the people; the open yet wild nature of this park provided a good zone for them to run around in.

The one negative about this area was that it was lacking in some kind of a shop or food outlet, though that may say more about I stupidly forgot to pack lunch than anything else! As a result, I had to walk up a long road with a fairly steep incline to reach Thorpe Bay high street, where I found civilisation again, featuring, amongst other things, a Tesco Express and a very industrious parking warden. By the time I had walked back down the hill to the seafront, the weather was beginning to turn. Dark clouds loomed overhead and I hadn’t planned this sudden change; my jacket didn’t have a hood. I hurriedly wolfed down my pasta salad, only to discover that some of the juice from it had leaked into my bag and onto my jacket and book. Lovely. This, and the fact that my phone’s battery had completely evaporated, persuaded me that it was time to bring this walk to an end. 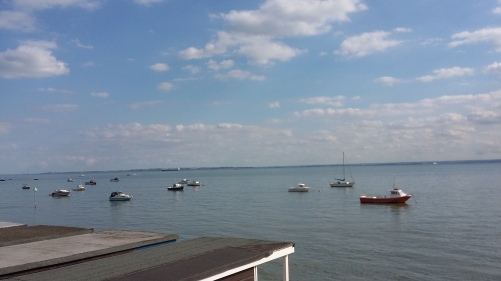 The route back into the centre of Southend was much easier that I had anticipated and unbelievably it stayed dry. Sadly, the closer I moved into the tacky cosmopolitan part of the seafront, the more people popped up on the path. Most of them seemed to be groups of schoolkids enjoying a day on the coast and thankfully there were only a couple of really drunk people. I had hoped to pop into the shops for a couple of bits but most of them on the High Street shut at 5:30 (??!!) on a weekday in the school summer holidays. It was an easy decision to head to Southend Central station and take the first of two trains home. Shoeburyness definitely made a nice change from the tourist heavy seafront of Southend but feels like it needs some care and money put into it, especially with its interesting military background.